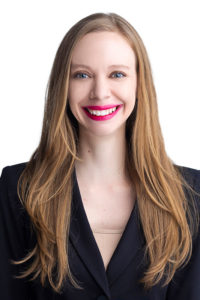 Growing up, Cait wanted to be either a lawyer or the Pink Power Ranger.  Now, as a tireless fighter for employees’ rights, she feels like she gets to be both.

Cait attended Kalamazoo College and graduated with honors in 2009.  She studied theater arts, Spanish language literature, and mathematics.  She also spent a year in Cáceres, Spain, studying at the University of Extremadura.  While in college Cait also worked as a Spanish and English language teacher, an LSAT tutor, and a ballroom dance instructor.  She spent two summers working as a human resources intern, going behind enemy lines to gain valuable insight which she uses to help employees today.

After Kalamazoo, Cait attended the University of Illinois College of Law on a merit scholarship and graduated with honors in 2012.  As a law student she participated in the International Human Rights Clinic and Duberstein Bankruptcy Moot Court. Cait interned with Thav, Gross, Steinway, and Bennett, representing dealerships during the Chrysler bankruptcy proceedings, and spent a year interning with the Illinois Innocence Project, helping wrongfully convicted inmates seek exoneration through DNA evidence.

In 2012 Cait became one of the founding members of Gold Star Law, PC. Her focus has always been plaintiff’s-side employment litigation, defending the rights of working people.  She has represented hundreds of employees in cases involving discrimination, harassment, unpaid overtime, FLSA misclassification, wrongful termination, medical leave violations, and contract disputes. She practices in Michigan and federal courts at the trial and appellate level.  She has been recognized as a “Rising Star” attorney, a Top Woman Attorney in Michigan, and the Top Rated Employment Attorney in Troy, Michigan.  Cait is excited to bring her extensive knowledge of employment law and enthusiasm for civil rights to the clients of Marko Law.