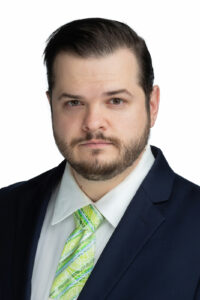 Christopher Putrycus was born and grew up in Grosse Pointe, Michigan. He graduated with manga cum laude honors from the University of Detroit Mercy receiving his degree in Biology. Based on his academic success and the relationship created with the university during undergrad, Christopher accepted a full Fellows Scholarship to the University of Detroit Mercy School of Law. While there, Christopher structured his scholastic career around becoming a proficient legal writer, as indicated by his membership in the University of Detroit Mercy Law Review, where he served as a Title Editor. Christopher’s experience as a law clerk inspired him to dedicate his Note to advocating for the reform of Michigan civil asset forfeiture law to protect further the property rights of citizens, particularly the most vulnerable and disparately impacted members of society by the abusive practices of law enforcement allowed under the law.

He further broadened his legal writing skill by obtaining practical experience, whether as a Judicial Intern for the Federal Pro Se Clinic, where a summary judgment motion he drafted and filed was granted by the Honorable Judge Bernard A. Friedman in U.S District Court, or as a Law Clerk, where he assisted two criminal defense attorneys with their 100 open cases for three years, by drafting deviations, proposed orders, and other legal documents and memoranda.

Being born and raised, attending college, and working in or just outside the city of Detroit his entire life, Christopher’s passion for representing and advocating for representing members of its community and the state of Michigan at large, may only be rivaled by his passion as a fan of each of Detroit’s professional sports teams. He is excited to bring his experience from diverse areas of law, and join Marko Law with its renowned reputation in personal injury, employment, and civil rights matters, as a Research and Appeals Attorney. Christopher believes that working with the firm’s accomplished professionals with allow him to continue to flourish as an attorney and deliver justice to his clients.